Is Bigger Better When it Comes to Trucking? 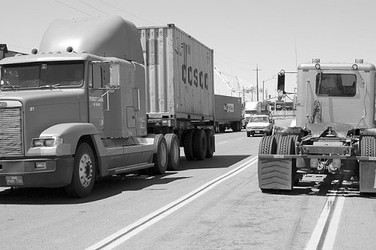 Coalition trying to clean emissions at port thinks that the proliferation of small truckers feeds the problem.

Environmentalists and organized labor want the Port of Oakland to overhaul the local trucking industry.


Small is big in the environmental movement. It's widely accepted, for example, that mom-and-pop organic farms are more eco-friendly than large factory farms. And there's no doubt that small, independent businesses that make communities vibrant are more sustainable than corporate giants who exploit workers and the environment. Yet it turns out that small and independent may not always be best, particularly when it comes to the Port of Oakland and pollution-belching trucks.

In fact, a group of East Bay environmentalists has teamed up with organized labor to push for a plan that could ultimately put thousands of small, independent truckers out of business. The Coalition for Clean & Safe Ports argues that independent truckers simply can't afford to replace their older diesel-spewing trucks, which have polluted West Oakland for decades and led to dramatically high asthma rates among area children.

Consequently, the coalition is backing a plan that would ultimately replace most of the 3,000 small, independent truckers at the port with large trucking companies that have the financial wherewithal to meet new state emissions standards and live up to the port's recent ban on gross polluters. "It's about who can pay for the cost of cleaning up the truck fleet," explained Doug Bloch, who is director of the coalition and a labor organizer.

Last month, the Oakland Port Commission banned trucks made before 1994, and required that those produced between 1994 and 2003 be retrofitted to control tailpipe emissions. The new rules essentially mirror those adopted by the California Air Resources Board. The port is still working out the details of how to enforce the truck ban, but it most likely will result in terminal operators refusing to allow older trucks at the seaport and forcing drivers of newer trucks to prove that they meet the new standards.

The coalition supported the truck ban, but says it won't have the desired effect unless trucking is overhauled at the port. The problem will become especially acute in 2014 when all trucks built before 2008 will be banned. Small operators, the coalition argues, simply don't have the money to buy new trucks at $125,000 apiece. "The bottom line is — who is going to pay to clean up the air?" Bloch said.

But the coalition's plans are being met by stiff opposition by local truckers. Bill Aboudi, owner of Oakland-based AB Trucking, noted that in a recent study commissioned by the port, most independent truckers said they don't want to give up their businesses and go to work for a larger company. And he argued that the coalition's campaign is really about organized labor and the Teamsters, and not the environment. "It's simple," he said. "The labor movement is trying to unionize small businesses."

Aboudi also argued that small, owner-operated trucking companies have a bigger incentive to retrofit their trucks, and thus clean up the air. If their trucks are banned, they're effectively out of business. "With the owner operators, the truck is their bread and butter," he said.

But the coalition points out that the same recent study revealed that there is a glut of trucks at the port, because there are too many independent operators competing against each other, thereby worsening air pollution in West Oakland. The report, completed earlier this spring, concluded that switching to larger trucking companies would lessen the number of trucks at the port, because those businesses won't flood West Oakland with lots of trucks vying to underbid each other.

The coalition says the problem can be solved if the port adopts a plan similar to the one implemented last year at the Port of Los Angeles. In October, the LA port commission approved a so-called concession/employee model, in which most owner-operated truck companies were to be replaced by larger firms that employ dozens if not hundreds, of truck drivers. Organized labor, including the Teamsters, supported the plan and fully acknowledged that it wants to unionize truck drivers. Union reps say that big shipping companies exploit small, independent truckers by pitting them against each other and driving down prices. Environmentalists supported the plan because they viewed it as the most efficient way to replace dirty, older trucks in Southern California.

However, the American Trucking Associations, a trade group that represents truckers nationwide, immediately sued the Port of LA, alleging that its plan violated federal law. In March of this year, the Ninth Circuit Court of Appeals in San Francisco sided with the trucking group, and effectively struck down the LA port plan. The court said that when Congress deregulated the trucking industry in the 1980s, it prohibited states or ports from adopting rules that regulate truckers, unless it concerns vehicle safety. The court also struck down a similar plan adopted by the Port of Long Beach. The two ports are the largest on the West Coast and are the Port of Oakland's main competitors.

Realizing that the court's ruling also prohibits Oakland from adopting LA's model, the East Bay environmental and labor coalition now wants the Oakland Port Commission to lobby Congress to change federal law. The group says that California's entire Democratic Congressional delegation wants to allow ports to regulate trucking. In a March letter, Congressional representatives from the Bay Area wrote a letter to Port of Oakland Executive Director Omar Benjamin, pointing to the Port of LA's model as being "a comprehensive and sustainable approach."

For its part, the Port of Oakland appears ready to endorse the coalition's proposal. At last week's port commission meeting, commission President Victor Uno, who also is a labor organizer, instructed port staff to come up with a resolution that would urge Congress to give ports more power over trucking.

Independent truckers are sure to oppose the move. Aboudi argued that switching to larger trucking companies won't solve the problem of too many trucks at the port. He said that bigger companies avoid the port because it's a headache. Trucks often sit idling for half the day, waiting to be loaded or unloaded. He also said that big companies steer clear of the port because they don't want the hassle of dealing with dozens of different shipping companies and multiple terminals.

But Bloch countered that larger companies avoid the port because they can't compete against independent operators who have no overhead costs. That would change, he said, if the port were to adopt the concession/employee model like LA. Last fall, after LA implemented its new model, two of the largest trucking companies, Swift Transportation and Knight Trucking, immediately applied to become concessionaires, he said. "They were hungry because there is money to be made," he said.

Finally, Bloch argued that the larger trucking companies also have an incentive to exert pressure on the shipping companies and terminal operators to work more efficiently. After all, they're not going to want their hourly truck drivers to sit idling at the docks. And, of course, less truck idling will result in less pollution in Oakland. Correction: An earlier version of this story included the wrong caption for the featured photo.