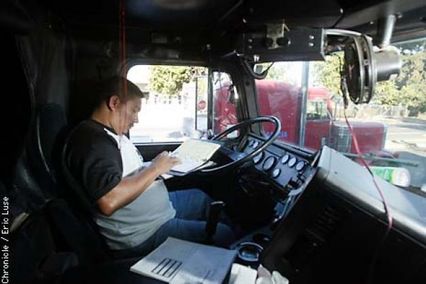 Independent trucker Naftalia Campos was hauling two-four loads a day for Oakland Port operations. He catches up on some paperwork hoping to pick up a haul, any haul at AB Trucking, Oakland.

In Oakland, where the biggest port between Seattle and Los Angeles is shut in a labor dispute, that dribbling has become a torrent of as much as $3.6 million lost every day for an estimated 6,000 truckers.

With no freight containers being loaded on or off the big ships moored in the bay, or tied up to piers, truckers have been forced to park thousands of payloads outside the dock gates. Thousands of other containers are sitting inside those gates, waiting to be picked up by truckers who can do nothing but stare at their would-be loads through wire fences.

With almost no other hauling work available to fill in the gap, there's nothing 18-wheel port haulers can do but count the hours, watch their bank accounts shrink -- and seethe.

Which is what John Gross, 39, was doing Thursday as he sat in a lawn chair alongside his refrigerated rig, tending the generator keeping his 41,900 pounds of beef at 29 degrees.

Gross picked up his load in Colorado Saturday, got here Sunday night and has been parked outside at the dock ever since, waiting to deliver to a Japan- bound ship. His fresh beef is good for 16 days, but because it's already been on his truck seven days, the shipper might not take it even if the port opened again today.

"It takes 11 days for the ship to get it to Japan, so I think they've already blown the window," said Gross. "But they don't tell us nothing." The meat company that supplied the load might pay him to haul it back to Colorado - - but then, they also could make him do it free just to be eligible for the next job.

Meanwhile, Gross is sleeping in his rig, washing in local rest rooms, spending $20 a day on diesel to run the generator and missing out on other hauling jobs.

"Only thing they said when we rolled in here was to come to this parking lot and sit," Gross said. "Which is all we've been doing. It's infuriating."

There's no quick end in sight. The Pacific Maritime Association locked out dockworkers from the International Longshore and Warehouse Union last Friday at 29 ports in California, Oregon and Washington, and although negotiations resumed Thursday, experts said the chances of commercial shipping resuming this week are microscopic at best.

Gross drives for an R.E. Monson office near his home in Nebraska, and the company may help with his losses -- but nothing is guaranteed in a labor dispute. He owns his own rig, like most of the truckers hauling at the port, and while he's waiting around, missing other load opportunities, he still has to pay his bills.

Those bills, plus the lost income while the freight's not moving, come to between $300 and $600 a day, Gross and other truckers at the port said this week.

Stephanie Williams, vice president of the California Trucking Association, estimated that as many as 6,000 truckers are being sidelined at Oakland Port alone. That means $1.8 million to $3.6 million in lost daily income.

That may be a drop in the bucket compared with the estimated $1 billion a day the lockout is costing the national economy, but it's a lot of scratch for drivers who usually don't keep much of a financial cushion as they juggle truck and insurance payments that can crest at $4,000 a month.

"It's awful for these guys," said Williams. "Oakland Port usually handles about 10,000 loads a day, so even if they open the gates tomorrow, the backup will be so bad, trucks will be lined up for days like elephants at a circus."

She said one other vexation for truckers is the $100 to $150 they must pay in "demurrage" penalties to ports and shippers for every day a container sits on the dock after the first few days.

"It could add millions more to the losses during this lockout, and it's totally unfair," she said.

Oakland Port spokeswoman Midori Tabata said those fees are being lifted during the lockout.

But Williams said she is trying to negotiate with every port to have the fee forgiveness backdated to a few days before and after the lockout. That's because truckers' containers were -- and will be -- sitting around longer because of the backlogs associated with the lockout, she said.

Bill Aboudi, who usually runs a stable of 50 truckers at his AB Trucking on the Oakland waterfront, had only 12 drivers on the road Thursday -- all with small jobs to pass the time.

He estimates that his business, and that for the other 150 outfits like his along the docks, is off 90 percent. His usually empty storage yard now has 42 full containers all waiting for ships, plus 80 empty ones waiting to be filled.

"Look at this," he said gesturing behind him at a wall plastered with shipping orders representing the full containers, plus others on the dock he can't pick up. "Just imagine the trouble for all the people waiting for this stuff, let alone the trouble for my truckers who can't deliver it."

One container was full of frozen sardines and jellyfish headed to Japan, and another held 30,000 pounds of vodka from Rotterdam waiting to come off the docks.

"There's nothing I can do with these, and, meanwhile, my guys are in the back playing cards," Aboudi said. The poker games go on for hours some days, until the truckers get bored and go home. But every day, they call in or come back, hoping for good news.

"I've got a wife and two kids, and every day, I'm just going to the ATM and watching it go down," said AB driver Neftali Campos of Oakland. "If this keeps up, I'm going to have to stop paying off my credit cards. After that, who knows?"